Know before you hit go

3 tips for a successful crowdfunding campaign

Guest column
It's not easy getting green. Getty Images

Kickstarter is a widely popular crowdfunding platform that helps people to raise money and awareness for their creative projects. While known for product-focused campaigns, musicians to film producers have also achieved success on the platform. In September of 2017, my Houston-based startup GetAlcove.com launched our first kickstarter campaign. While we exceeded our campaign goal, it was a very intense 45 day campaign. Let's consider the statistics: 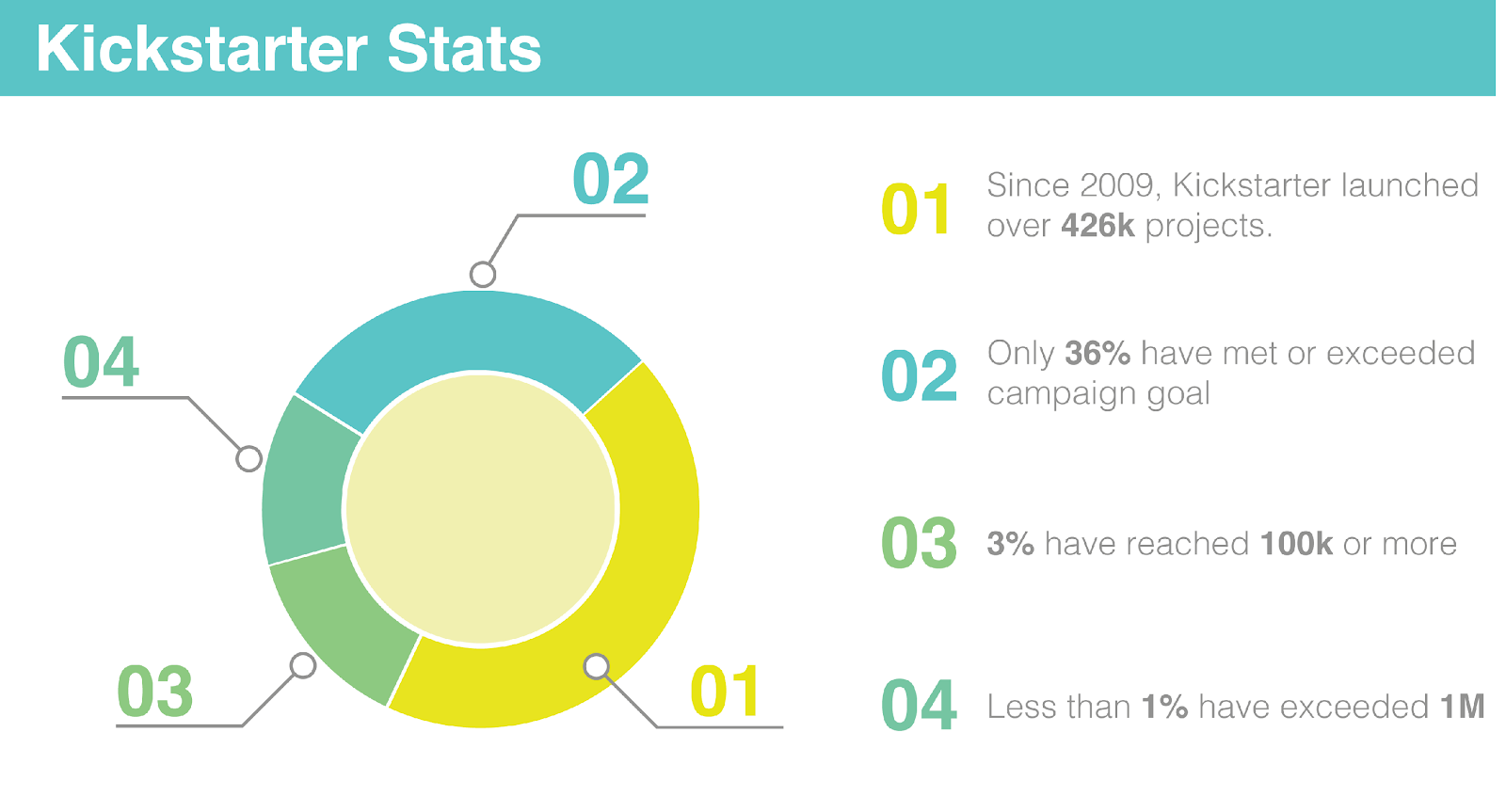 Yes, almost 70 percent of projects fail. Don't fret. Understanding how to effectively plan and launch your campaign will increase your chances for meeting your campaign goals.

By March 2017, my co-founder and I received enough customer feedback to warrant the pursuit of developing Alcove Workstation™ further. We were attracted to crowdfunding as it presented a viable option for validating our concept with a wider audience while also raising the initial working capital necessary to mass producing Alcove. After researching the various crowdfunding platforms, we decided on Kickstarter as it is well known for launching product-focused campaigns and has a strong brand that we could leverage during our marketing efforts. While we read countless publications on how to prepare for our crowdfunding campaign, our experience on Kickstarter garnered three key lessons.

1. Spend up to one year prepping before launching your campaign.

I can't stress this enough. After we decided to launch, we spent six months engaging with our target audience and obtaining verbal commitments from friends and family and past colleagues to back our project. We also presented at local events and evangelized our brand via social media marketing. In hindsight, we should have spent additional time finalizing the production ready sample of our product prior to launching.

Once you launch your campaign, the clock starts ticking and you'll need deliver fast. Due to a myriad of issues with remote manufacturing, we inevitably missed our original ship date. Fortunately, the kickstarter community is forgiving and recognizes the inherent challenges with bringing a product to market. Even so, I recommend launching your campaign as close to your final concept as possible to reduce unforeseen delays with manufacturing and shipping logistics.

Once you launch your campaign, the clock starts ticking and you'll need deliver fast.

2. Determine which crowdfunding platform is right for your project.

There are four main types of crowdfunding platforms. Kickstarter and Indiegogo are rewards-based whereas platforms like GoFundMe are donation-based. More recently, equity, and debt based platforms like Houston's NextSeed have garnered attention from campaigners seeking alternative methods to raising funds and deferring payment.

Take the time to read about each type and contact each platform for specifics about how they will support your campaign during and after campaign. Indiegogo does a solid job of highlighting their partnerships with vendors that can assist you during different stages of your campaign; offering marketing promotion, direct links to manufacturing vendors, and additional funding options even after your campaign ends.

The next step to determining the right platform for your project is to search for similar "like" products. If you are launching the most revolutionary ear buds on the planet, then you want to ensure people are backing ear buds or similar product on the platform/s you are considering. A simple search on each site will pull up all ear bud projects to date. Then, you can quickly assess the patterns of the most successful vs. unsuccessful campaigns.

This is both important and hard to determine. Let's break it down.

The right campaign goal
The campaign goal is the total dollar amount you want to raise by the end of your campaign. The goal amount can be adjusted once on Kickstarter but I recommend that you keep it low — $5,000-$10,000 — to ensure you meet your goal within two days — three days max. Keep in mind you are competing with four to five thousand live projects at any given time. If you make your campaign goal, Kickstarter's algorithm pushes your project up the list and you have a good shot of being listed or even featured on the front page of Kickstarter's website. If you make your campaign goal too high and don't meet your goal with those couple days, Kickstarter's algorithm pushes your project down the list. If I recall, our campaign went from approximately 115 to 800 after day two. Each day that passes, your project is pushed even further down the list of over 4000 projects. What this means to your project is that unless you have a serious marketing engine behind you, no one will see your project outside of your immediate contact list or followers on social media. This is where hiring the right team of marketers and PR can be invaluable.

The right team
Think of the development of your crowdfunding campaign as a micro-enterprise site that requires the right mix of talent to build out. Funded startups with established teams and products in market, for instance, are launching on Kickstarter as a way to increase market awareness of their new products. For the boot-strapped startups with small teams, leverage your strengths and hire for gaps in skills to ensure you develop the right communications, pricing strategy, and overall layout of your page. To be clear, a production quality video is an absolute must.

The right time
Finally, consider the timing of your launch to align with complimentary events or holidays. If your product is focused on education/learning, the obvious timeframe would be to launch during back to school. Another way to galvanize your target audience is to identify popular conferences for your industry. For our campaign, we aligned with the Tech Disrupt conference in San Francisco and literally went live on Kickstarter directly from our exhibit booth!

While I can not make any guarantees for your campaign's success, I am confident that if you apply these tips, you will be that much closer to achieving your campaign goals.

Yared Akalou is the founder of Houston-based Alcove.

Natalie Harms
With Clutch, connecting brands with creators has never been easier and more inclusive. Photo courtesy of Clutch

An app that originally launched on Houston college campuses has announced it's now live nationwide.

Clutch founders Madison Long and Simone May set out to make it easier for the younger generation to earn money with their skill sets. After launching a beta at local universities last fall, Clutch's digital marketplace is now live for others to join in.

The platform connects brands to its network of creators for reliable and authentic work — everything from social media management, video creation, video editing, content creation, graphic design projects, and more. With weekly payments to creators and an inclusive platform for users on both sides of the equation, Clutch aims to make digital collaboration easier and more reliable for everyone.

“We’re thrilled to bring our product to market to make sustainable, authentic lifestyles available to everyone through the creator economy," says May, CTO and co-founder of Clutch. "We’re honored to be part of the thriving innovation community here in Houston and get to bring more on-your-own-terms work opportunities to all creators and businesses through our platform.”

In its beta, Clutch facilitated collaborations for over 200 student creators and 50 brands — such as DIGITS and nama. The company is founded with a mission of "democratizing access to information and technology and elevating the next generation for all people," according to a news release from Clutch. In the beta, 75 percent of the creators were people of color and around half of the businesses were owned by women and people of color.

“As a Clutch Creator, I set my own pricing, schedule and services when collaborating on projects for brands,” says Cathy Syfert, a creator through Clutch. “Clutch Creators embrace the benefits of being a brand ambassador as we create content about the products we love, but do it on behalf of the brands to help the brands grow authentically."

The newly launched product has the following features:

Clutch raised $1.2 million in seed funding from Precursor Ventures, Capital Factory, HearstLab, and more. Clutch was originally founded as Campus Concierge in 2021 and has gone through the DivInc Houston program at the Ion.