the robots are coming

John Egan
Jul 20, 2020, 10:48 am
For better or for worse, automation is going to have an affect on specific jobs in Houston. Getty Images

A new report from UpSkill Houston, a workforce initiative of the Greater Houston Partnership, puts the implications of workplace automation into stark focus. According to the report, more than 50 percent of middle-skill jobs in the Houston area face a higher-than-average risk of being upset by automation.

Peter Beard, who leads UpSkill Houston and is senior vice president for workforce development at the Greater Houston Partnership, says this means technology will "get embedded even more in the workplace than it's ever been before. … People's jobs will change because they have to work alongside technology. And there will be some jobs that get displaced because of that technology."

"Robots are coming," he adds, "but they're not going to replace us. We're going to have to figure out how to work beside them."

Middle-skill jobs require less than a four-year bachelor's degree but more than a high school diploma. In other words, jobs fitting into this middle ground might demand a two-year associate's degree or a training certificate from a technical school.

The report, released July 16, points out that middle-skill occupations in manufacturing and construction, for instance, face a high risk of disruption as companies adopt technologies that automate tasks, such as prefabrication of building materials. By contrast, the report notes, automation places jobs in the health care and service sectors in far less jeopardy because they generally rely on tasks that can't easily be automated. For example, jobs in health care often require social skills that can't be replicated through automation, which includes artificial intelligence, robotics, and machine learning.

However, jobs in health care aren't entirely immune from shifts in the workplace. The report indicates jobs in workforce segments like health care, sales and office support, IT, management, and drafting now require a medium or high level of digital skills.

That being said, all workers — regardless of their industry, occupation, or education — must embrace solid digital skills in order to succeed in the workforce, the report states. Beard says that to compete in today's workforce, a high school graduate must be proficient in Microsoft's Word, Excel, and PowerPoint programs as well as in a customer relationship management platform like Salesforce.

The findings in the UpSkill Houston report come at a pivotal time for the Houston economy, given the job-slashing double whammy of the coronavirus pandemic and the oil slump. The pandemic "has accelerated and accentuated a fundamental change that has been underway — a change in the education and skills needed to be successful in the workforce today and into the future," the report states.

That change poses particular challenges for low-skill and middle-skill workers in the Houston area, according to the report. The report recommends that workforce development stakeholders, including employers, schools, and community organizations, build a regional "framework" aimed at ramping up skillsets so workers can seize increasingly elevated career opportunities.

But that takes employers collaborating with schools to ensure those skills are being taught, he says, and employers and schools motivating students to consider jobs that incorporate those skills.

Houston hospital ranked best in state according to recent report

Out of This World

Guest column
When examining how you can better prepare and respond to ongoing climate-related challenges, the CRE community needs to prioritize marginalized communities that are already experiencing most of the negative impacts. Photography by Peter Molick

Houston is no stranger to hurricanes, and in recent years winter storms have become an increasing concern. Following the winter freeze in 2021, more than 4 million Texans were left without power, water, or heat. The state’s infrastructure system was adversely impacted concurrently — including workplaces, hospitals, transportation, homes, drinking water distribution, electric power generation, agriculture, and grocery stores. Now, a new potential disaster is on the horizon. Recent research shows Houston is most likely to be affected by wildfires, a climate-related challenge that our city has not previously faced.

According to the Gensler Research Institute’s 2022 U.S. Climate Action Survey, since 2019, only 18 percent of Americans believe their communities are built to withstand climate change. The good news is Americans overwhelmingly agree that addressing climate change is urgent. The question many are asking is — “How can we take action to better prepare buildings and cities to weather the climate challenge?” The solution is simple. In order to understand where we need to go, we must understand how we got here.

With a population that has more than doubled in the past 50 years, it is challenging for most Houstonians to imagine a time when The Bayou City was nothing more than agricultural lands and oil fields. Today, Houston is known for being the fourth-most populous city in the United States. It is a sprawling concrete jungle home to the world’s largest concentration of healthcare and research institutions. When reflecting on the past 50 years, one can’t help but evaluate the city’s successes and shortcomings. While Houston has succeeded in becoming a diverse, international city, we have sacrificed the very ecology that once made up one of the country’s most productive agricultural areas. By 1980, Houston possessed the least amount of green space per person in the country.

As new developments popped up across the city, it became difficult to convince developers to pursue third-party certifications such as LEED, a globally recognized symbol of sustainability that provides the framework for designing healthy, efficient, carbon saving buildings. We can credit Hines with being one of the few developers in Houston to prioritize green design during the early-2000s. City leaders also began advocating for resilient strategies and more green space to attract and retain international talent and businesses. In recent years, we have seen an increase in buildings that are achieving LEED certification, and soon it will become the baseline. 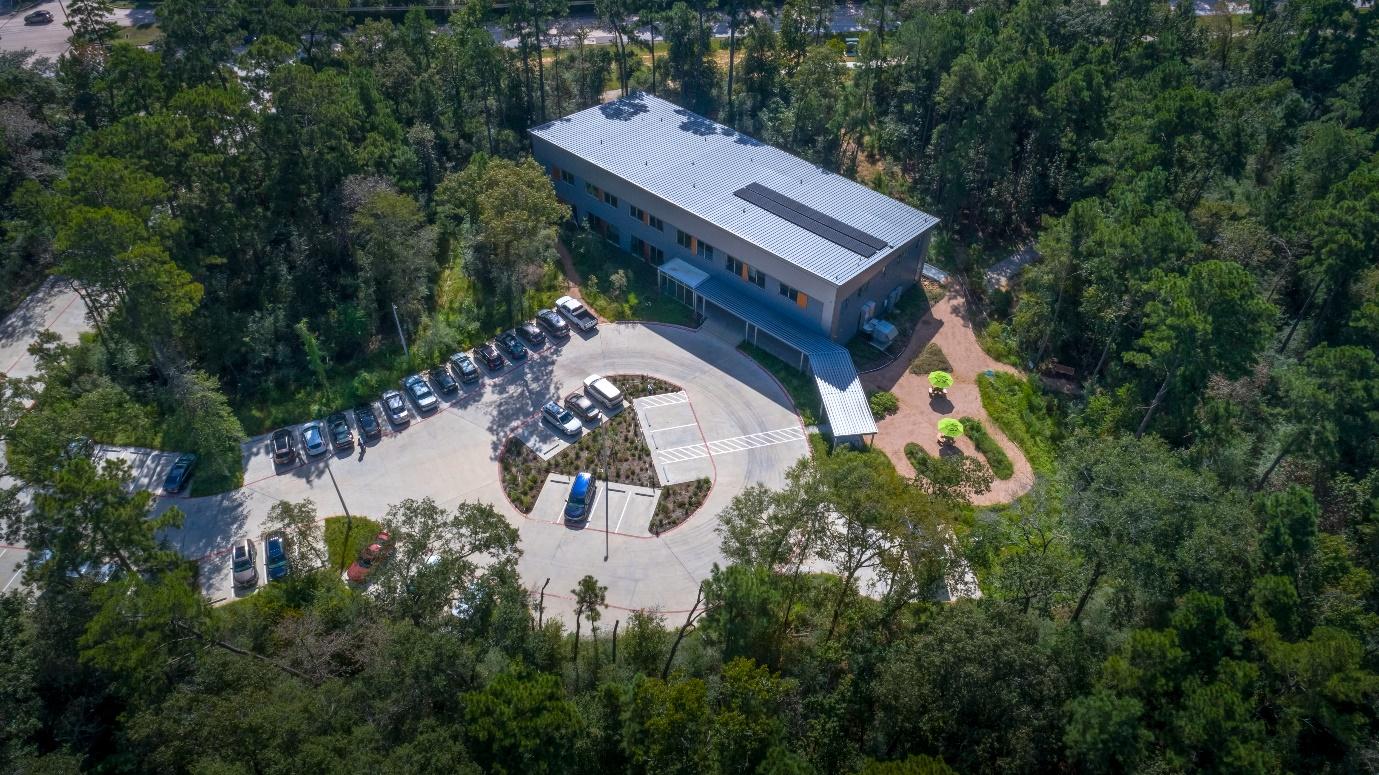 An example of a project leading the way for resilient design is The Houston Advanced Research Center (HARC). In 2017 the organization completed work on its LEED Platinum Certified headquarters which was designed to meet the ENERGY STAR certification rate of 99 (out of 100). This means that the building is more efficient than 99 percent of all office buildings in the United States. Skanska is another construction and development company bringing a sustainable mindset to downtown Houston with its work on Bank of America Tower. In 2019, the 775,000 square foot building became the largest LEED v4 Platinum Core and Shell certified project in the world to date and was developed with harvesting technology that will significantly reduce energy usage.

It’s also important to understand the impact that the climate crisis is having on people. 91 percent of U.S. Gen Z/Millennials have been affected by extreme weather events since 2019, the most of any generation. These experiences have resulted in two generations preparing to react and combat climate change and has encouraged a spirit of transparency among companies who choose to share their environmental goals and strategies.

For architects and designers, addressing building and energy codes is proving to be the next big design consideration. As codes progress in the coming years, the result will be more unique and unexpected building designs.

When reimagining the use of buildings, Architects Paulina Abella and Tayler Trojcak propose an experimental process for repurposing vacant buildings called High Hackers. The concept provides an opportunity for developers to offer prime downtown real estate to people with diverse skill sets, whom they call “hackers,” to pursue projects shaped by their individual ideas. These hackers—makers, artists, and academics—will work alongside one another in spaces that encourage them to coexist with creatives from other fields and disciplines. More importantly, it fosters a collaborative, organic, and innovative workflow.

When examining how you can better prepare and respond to ongoing climate-related challenges, we encourage prioritizing marginalized communities that are already experiencing most of the negative impacts. Promoting awareness and optimism in our communities is another simple yet effective way to make a difference. For businesses, creating a sense of continuity in the face of climate events, investing in energy and resource efficiency and adaptation, and addressing insurability and the long-term value of real estate will ultimately help lead Houston and its community members toward a place of preparedness and resiliency.

Rives Taylor directs Gensler’s Global Design Resilience teams and initiatives and has been a faculty member of both Rice University and the University of Houston for 30 years. Maria Perez is a design resilience leader for Gensler’s South Central region and director of sustainable design based in Gensler’s Houston office.

Houston hospital ranked best in state according to recent report