Report: 2020 brought fewer, larger VC deals for Houston — but angel investment is on the rise

Natalie Harms
Jan 22, 2021, 10:44 am
2020 brought over $700 million in venture funding deals into Houston, and startups saw larger deals in the first half of the year with a growing interest in angel activity. Image via Getty Images

Houston startup's venture capital deals continue to grow in 2020, according to a new report from Houston Exponential. Last year, VC dollars were up, while deal count was down, representing more mature deals coming into the ecosystem — but the second half of the year was defined by a growth in angel investment interest.

The report by Serafina Lalany, chief of staff for HX, found that the Bayou City brought saw $715 million across 117 VC deals, according to Pitch Book data. It's the fourth year Houston has seen VC growth, and last year the city reported over $563 million across 168 deals.

"Houston has put concerted efforts into building its innovation ecosystem," says Harvin Moore, president of HX, in a release, "and 2020's record-breaking results show we are seeing not only resilience in the tech sector, but a significant increase in the rate of formation and success of growth-stage companies, which have an outsized effect on our local economy in terms of high paying job potential and Houston's increasing attractiveness as a great place to work." 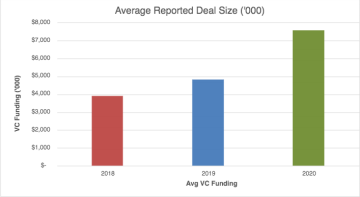 Last August, HX published a report on the first half of the year and that study found that Houston — facing the challenges of both the pandemic and the oil price drop — managed to see a 7 percent increase in funding compared to the national average of 2.5 percent. With the second half of the year, the city's VC increase from last year was over 25 percent and up 252 percent since 2014.

But the second half of the year seemed like Houston's earlier stage VC activity returned, and Blair Garrou, managing partner at Houston-based Mercury Fund, confirmed this to InnovationMap on the Houston Innovator's Podcast in December.

"Seed rounds have definitely bounced back. We're seeing a lot of seed activity, because there's been a lot of seed funds raised," Garrou said on the podcast, adding that he's observed an increase in angel investment interest. "People are realizing that money is in innovation and tech — especially in software."

In her report, Lalany found that in Houston, angel investments are out-pacing seed, creating a "competitive environment."

"The addition of multi-stage and nontraditional investment firms into the arena has created upward pressure in deal valuations and sizes. The average seed round in 2015 was $1 million, whereas today it's double that," the report reads. "With these firms turning inward to focus on protecting their current investments at the start of the pandemic, the propensity for smaller, more riskier investments have declined."

Stephanie Campbell, managing director of the Houston Angel Network, said she's seen a rise in new membership for the organization. Last August, she was on track to get to 150 members — up from just 60 in 2018.

"Despite COVID, we've continued to grow," Campbell told InnovationMap, adding that she's heard investors express that they have more time now to dive in. "People are very much still interested in learning about deploying their capital into early-stage venture. They're looking for a network of like-minded individuals."

In contrast to this early stage activity, the VC activity that was still occurring was defined by larger deals. With VC essentially halting in March and April — especially in cities like Houston, Garrou adds — it makes sense that investors wanted more "sure things" and would invest more funds into companies they already know, versus being able to source new deals in person.

"When you go to later stages, there are a lot fewer deals going on," Garrou continues on the podcast. "Now, there may be larger investments being made, but I think they are into fewer companies, and I think that's just due to the the pandemic and the ability just to not be able to do face-to-face."

As Houston moves through 2021, the city is poised well for more growth and a continued diversification from just oil and gas, as Moore says in the release.

"Houston Exponential was created four years ago by civic and business leaders to deal with an existential problem: our dependence on the energy and medical sector without a thriving startup culture to lead us towards a future that will look very different from the past," he says. "COVID and the de-carbonization movement have made that need much more urgent — it's both a huge challenge and an enormous opportunity."

Natalie Harms
Nauticus Robotics has expanded to the United Kingdom and to Norway. Image via nauticusrobotics.com

A Webster-based tech company has officially launched operations in two European countries — and it's only the beginning.

Nauticus Robotics Inc. (NASDAQ: KITT), which went public a few months ago, opened operations in Norway and the United Kingdom, "beginning the company’s international expansion strategy for 2023 and beyond," according to a release from Nauticus. The company develops underwater robots, software, and services to the marine industries.

“The ocean touches nearly every aspect of our lives, yet paradoxically seems to receive less attention and innovation when compared to other sectors,” says Nicolaus Radford, founder and CEO of Nauticus, in the release. “As we expand our operations to these strategic locales and beyond, our core mission remains the same: to become the most impactful ocean robotics company and realize a future where autonomous robotic technologies are commonplace and enable the blue economy for the better."

The two new operating bases are in Stavanger, Norway, and Aberdeen, Scotland. The two outposts will serve the North Sea offshore market. According to the release, Nauticus will work with local partners to service the region’s offshore wind and oil and gas markets. The company will also expand Nauticus Fleet, a "robotic navy of surface and subsea robots," which was established in April of 2022.

These two new regional offices are just the first examples of international growth Nauticus has planned, according to the release. Established to serve as logistics operation centers, the company's expansion plan includes new remote operation centers and service teams around the world in growth markets. The company did not announce any specific expansion plans.

"We are eager to ramp up activities in these international markets as our growing team contributes to our mission," Radford adds.

In October, shortly after its IPO, Nauticus announced that it has been awarded a second multimillion-dollar contract from the U.S. Defense Innovation Unit, part of the U.S. Defense Department, for development of a self-piloted amphibious robot system powered by the company’s ToolKITT command-and-control software.

The company was originally founded in 2014 as Houston Mechatronics Inc. before rebranding in 2021.